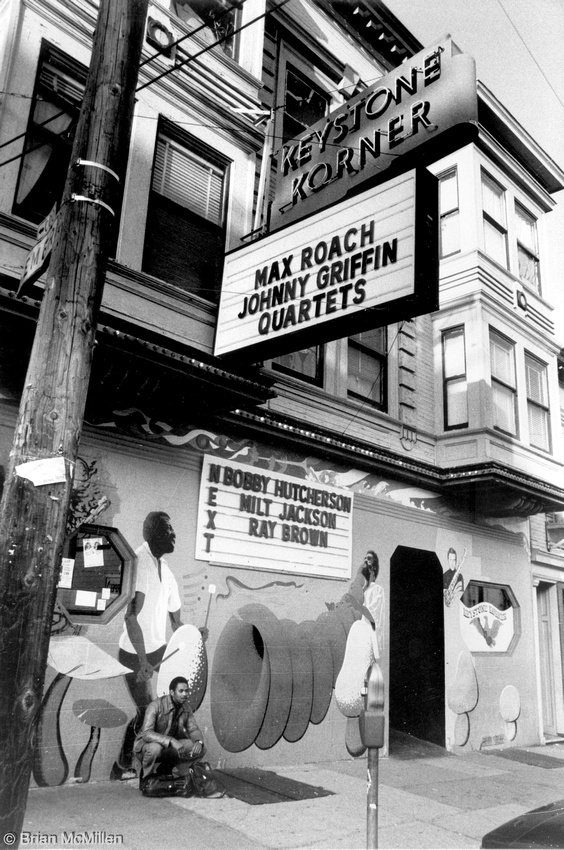 Keystone Korner was a world-class Jazz club in San Francisco, run from 1972-1983, and booked by pianist Todd Barkan, who now resides in Baltimore, Maryland.  The club was next door to the North Beach precinct of the SFPD, the Keystone Kops.

It presented the finest artists of the idiom from solo to big-bands, but mostly small groups in quartet or quintet.  Most artists played for 6 nights, sometimes 2 weeks.  On Mondays, there would be jam sessions, or shows by local artists, or another special event.  It was Jazz every night of the year!  Some compare the booking policy to that of the Village Vanguard in NY, but of course Todd put his stamp on the happenings at the club.  At the end of each year, patrons would be treated to the Keystone Korner Holiday Jazz Festival, with amazing line-ups with the likes of Stan Getz, Dexter Gordon, Rahsaan Roland Kirk, Art Blakey, Max Roach, Charlie Haden, Carla Bley, Sonny Stitt, Kenny Burrell, Jackie McLean, Cedar Walton and other heavy-weights playing onstage together.  And the vocalists -- Betty Carter, Ernie Andrews, Jon Hendricks, Abbey Lincoln, Leon Thomas to name a few.  These artists all went way back together and had a lot of love for each other, so it wasn't just a bunch of All Stars thrown together.  It was a musical Love Fest presented by maestro Barkan, who also had and has deep love for all the artists.

I learned to photograph in that setting.  The light was often a challenge, but I was mentored by the great Tom Copi, who was the house photographer.  Those Keystone Nights were the best time of my life, without question.  I also did tasks around the club to help out, in the box office, behind the bar, working the door, shuttling musicians around town.  It seemed as though I lived there day and night!  I was really steeped in the artists' sound and style, by hearing it right in front of me night after night.  I learned so much, first-hand, about the music from its creators.  And, each week I would take the band leaders to radio interviews to plug the gig and talk about their music and lives.  Talk about quality time for me with the artists, as well as photo-ops!

That was a one shot deal, there will never be another club like it.  I'm so blessed to have had that experience, when those artists were there, at a time when San Francisco booked a lot of real jazz and had a real music community and fan base.

Thank you Todd, and

Addendum - In 2019 Todd reincarnated Keystone Korner in Baltimore MD, partnering with Grandmaster Chef Robert Wiedmaier.  The club features cutting edge Jazz artists of today, as the San Francisco club did in its day.  The cast of characters is different, but the Jazz Message remains.